It seems only natural that I would finally be getting around to writing about all of the ‘grown up epiphanies’ I had when I reached the quarter-life milestone that is, turning 25, two months after I turned 26 …LOL.

Shut up you guys, I’m busy.

Turning 25 last year kind of freaked me out. You’re still young, but you’re not that young. You’re still the same person, but all of a sudden life isn’t looking quite how you imagined it would when you were finishing highschool. In my case, I hoped that by the time I left my early twenties I would have a bit of money in the bank, I’d be working my guts out in some kind of highly competitive career. Looking around, I was getting the feeling that everyone was starting to pair off and get a bit more ‘serious’ in their romantic relationships and, much to my horror, I was beginning to resemble the dude left standing in the middle of the school oval who nobody wanted on their rounders team.

Before I knew it, turning 25 went from being something that hadn’t really crossed my mind to becoming all kinds of a big deal and somewhat of a platform for a giant nervous breakdown.

Many a restless night was had and many a to-do list was made in an attempt to, in my own mind, “fix all of the things that I should be on top of by the age of 25.” What came out of these lists however, were not ways to fix things that I had perceived to be ‘broken’ or ‘sub par’ compared to the achievements of my peers. It was slightly more profound than that.

It could have been the start of some kind of maturity beginning to make its way into my personality or, it could have just been all the boxed wine I had begun drinking in an effort to prove that I was still as wild as I had been at 19. Either way, some very strange things started to make more sense in those weeks leading up to my 25th birthday, and I would love nothing more than to share them with you, because I think you’re hot.

Wait what? That’s right. If you know me, which if you’re reading this of course you do as my fan-base does not stray far from the people who populate my Facebook feed, you would know I bloody love a crash diet. Anything with the words detox, green, liquid only or rapid are where my diet weakness’ lie. However, soon after I turned 25 I had the craziest realisation. It went a little something like this: “HOLY FUCKING SHIT, I’m pretty sure that all of the times I have planned to do a detox diet, eaten atrociously in the lead up to the diet (because it won’t matter because I’m DETOXING) and then caved a day or two in and eaten everything in sight anyway, may mean that these diets might (MIGHT) not be working out so well for me and I may just be better off eating like a normal person all the time.”

Somewhere out there Michelle Bridges’ personal assistant is scurrying to get my contact details so I can feature on one of her new program ads. Because that’s how inspirational I have now become. Bridges, my people will call you.

2. Buying clothes that are two sizes too small because you’re “going to lose weight” is bonkers and makes you an instant dickhead.

I have an entire drawer of clothes that are a size 8, and they ain’t cheap clothes either. Jeans, dresses, a t-shirt that says ‘Beyonce for President’. I would love nothing more than to be strutting down Sydney Road tomorrow morning for my coffee wearing a t-shirt describing my thoughts on the job Beyonce was born to do. But I can’t, and you want to know why? Because I bought a top that said exactly that two years ago, two sizes too small, because I was going to lose weight. When, Rebecca, have you ever been a size 8? Never. Because it’s not your body shape. You have a perfectly lovely body that is a size 12 and that would prefer it if you stick to clothes that didn’t cling onto your stomach. Not a massive deal, now move on with your life and buy clothes that bloody fit you.

3. Eating a Vietnamese pork roll in your bed will leave you no choice but to change your sheets.

This one is a little controversial but stay with me. I live in a share house, and prior to this I lived by myself. Sometimes, it’s pretty hard to stay motivated enough to regularly clean your sheets, especially if you’re really the only one that has to ever sleep in them (what up!). There are a few reasons I find keeping on top of my washing so troublesome. Firstly, I live like an animal and secondly, I hate doing washing BUT I have worked out that if I eat a Vietnamese pork roll in my bed every two weeks or so I am left with no choice but to change my sheets as the crumbs feel like they will scratch my legs off. Gross – but effective.

4. If you’ve had shit happen to you, its OK, if not preferable to seek professional help.

I’m going to go into a bit more detail about looking after your mental health in another post, but I’ll still touch on it briefly here. I know I’m always smiling, but sometimes, I just get so sad. Last year when I was living by myself it got so bad that I couldn’t get out of bed. I’ve battled with depression on and off for years and I used to be so mad at myself that I just couldn’t pull it together, until I went and got help.

My mum left our family 6 years ago now, and I haven’t seen her since, and my dad has schizophrenia and can sometimes call me up to 40 times a day and just talk gibberish when he’s having a manic episode and sometimes those two things are just really hard to cop.

So I took my self off to my bulk billing doctor (because like a lot of people, I don’t have $500 to smack down on a psychologists visit every fortnight) who put me on to a bulk billing psychologist and I got help, free help, and now it makes dealing with whatever rubbish is going on a bit easier.

Just be kind. Not too hard to do. I don’t think I was always that kind. I think I can be a bit of a dick actually. Some of the things I have thought (and said) about people are more outrageous than an episode of KUWTK (Keeping up with the Kardashian’s, pay attention). But if you just.be.kind, you can’t really go wrong. If someone is pissing you off: just be kind. Or if the checkout kid at Coles fucked up your change at the cashier: just be kind. It just makes everything better, it makes you a nicer person, it makes you happier, I rarely get pissed off at people if they let me down (anymore) (I used to be one fiery broad) (and actually still am, because sometimes I forget my own fucking mantra). But when you have the scaffolding of trying to see it from their point of view, it makes it easier to deal with stuff if it doesn’t go your way.

I ain’t no Mother Teresa, but it’s just something I say to myself most mornings when I wake up, or when a patient is trying to punch me at work , or when I think I’m being a bitch, and it kinda works. 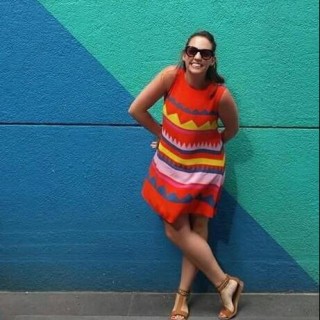 Bec is a 27-year-old nurse and freelance journalist from Melbourne who's just trying to find the funny in the ridiculous.